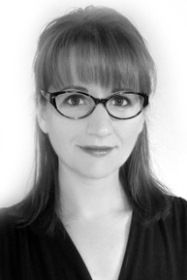 Writer
Connect with me

Sarah Bacon began writing for Foster Web Marketing as a freelance consultant in 2010, and became a full-time member of the writing staff in 2014.

In 2009, Sarah began covering community events for her local online newspaper, AnnArbor.com. It was her first exposure to the world of search engine optimization, and inspired her to take on online marketing projects in her spare time. She wrote for fun and worked for a living before she was finally able to combine the two when she was recruited into the Foster ranks.

Sarah has been a cranky old lady since her early twenties. She resigned herself to a spinster’s life of pie and cats, but a man married her anyway. He continues his assault on her cynical, loner persona by pretending that their dog can talk and being generally wonderful.

Despite limping through two marathons and participating in the Dexter-Ann Arbor Half Marathon every June, Sarah still enjoys running. She also enjoys knitting, sewing, gardening, coin collecting, jewelry making, and other hobbies in gerund form. She can usually be found trying to do several things at once.

Sarah once got to first base with Neil Diamond. Ask her grandmother, she’ll tell you all about it.