This Podiatrist Is Getting Five New Patients a Day. What’s His Secret?

Like many of our clients, we met podiatrist Dr. Schneider, of Tanglewood Foot Specialists, through Great Legal Marketing (GLM).

“I had known who you were through the GLM webinars. I’d been participating in them since 2008,” Andrew reminisced. “Though the webinars I got to indulge my passion for web marketing, get to know you, and pick your brain.”

But it wasn’t until he reached a dead-end with his current site that he began looking for help. Andrew had hired his sister-in-law to design his website. As a graphic designer, she created a beautiful site, but it simply wasn’t converting.

Wanting to make the most of the situation, Dr. Schneider created a Google analytics account. At the time, he was averaging less than 500 visits a month. But using information from the GLM seminars, he began to add more SEO (Search Engine Optimization) strategies to his website, teaching his sister-in-law to make the changes as they went. And the doctor started to see results!

“At first I was averaging less than 500 visits a month,” said Andrew. “But I was able to bring that up to 1,500 a month; then I maxed out. I knew that if I was going to grow and not be frustrated by web marketing I needed to make a change.”

A Fork in the Road

When Dr. Schneider decided to get help, he looked into other, more podiatry-centric marketing companies. But somehow, he always came back to Foster Web.

“Hiring you didn’t seem to be the logical step because I looked at the surface and you were marketing exclusively to lawyers,” said Andrew. “I wondered how your expertise would translate into working with a doctor?”

And it wasn’t just our experience with attorneys that made Andrew gun-shy; we were expensive!

“As a podiatrist I could have made a significantly lower investment with another company,” he said. “But I made the investment with you, got my site up and running and it was awesome! I now see why FWM is more expensive. Among other things, DSS™ (Dynamic Self-Syndication™) is one of the most powerful tools that anybody who wants to be successful on the web could possibly have.”

“I Had to Change My Whole Mindset”

Dr. Schneider is the only doctor in his practice. Dedicated to creating the content that he knew would improve his site, his brand, Andrew began writing his own content. He loved having control over what his website said and what was sent out into the world with his name on it.

Andrew was kicking content butt; writing and loading content to his site on an average of once a day. But somehow, he still wasn’t making the most of the types of content he could. He fell into the trap so many of our clients have: writing the content that they want, not the content their clients want.

“I didn’t want to write FAQs. I never typed questions into a search bar, I never went to FAQ sections on websites, so I assumed that nobody does,” said Andrew. “But I had to get out of my own head and realize that it wasn’t about me. Chad finally convinced me that most people type questions into search engines, so I gave it a try.”

Dr. Schneider wrote ten FAQs for each of his 22 practice areas—yep, 220 FAQs. He worked hard to understand the questions potential patients were asking, and he answered them. The results?

“Now, of my five most popular pages, four are FAQs,” laughed Dr. Schneider. “I admit it, Chad was right. So now I promote this to other professionals. I tell them that I had to change my whole mindset: it’s not about me, it’s about them, about the patient. Doctors must have a FAQ section!”

Did it Work Too Well?

All of Dr. Schneider’s quality content was attracting a lot of attention, and a lot of new patients. He found himself without the time needed to write his own content.

“My patient volume increased so much that I was overwhelmed with the writing,” mused Dr. Schneider. “So I hired a writer to help me create my content. She took the time to get to know my voice and is a true professional. For the first time ever, I wasn’t writing anything.”

But hiring a writer wasn’t an easy decision for Dr. Schneider. In fact, he calls it “the hardest thing I did.” Releasing that control was difficult but well worth it. In fact, he recently took his first two-week vacation ever. While the transition was difficult, hiring a professional writer has expanded the topics that Andrew has on his website. For example, his writer picked up something Dr. Schneider never would have: Miley Cyrus’s footwear.

“Sometimes she does things I would never have thought of,” said Andrew. “For example, I was a little worried when I opened the site and saw that she had written about Miley Cyrus and her now famous twerking performance. I never would have thought to discuss the fact that Miley was wearing sensible tennis shoes, but my writer did! I love that she understands my desire for interesting and even provocative pop culture topics.”

As you have seen, Dr. Schneider has been creating content before it was cool. And the rich, frequent content had an unexpected—and most excellent—benefit.

“I was hovering around nine to ten thousand unique visitors per month,” said Dr. Schneider. “But after Google’s first Penguin update, Penguin 1.0, my website traffic shot up like crazy. I was getting 19,000 visitors a month! What it did was very, very quickly double my traffic. I was like, ‘Google finally found my website! I’ve finally been recognized for all the work I did!’ I was all kinds of excited!”

You see, while most people feared the release of Google’s Penguin, Andrew’s site actually benefited from it. The Penguin took a good hard look at the content on Andrew’s website and it liked what it saw. Talk about riding high on the Google wave! But his excitement wouldn’t last; like every wave, there is a crest before the wave comes crashing down.

“Then Google released Penguin 2.0.; this one addressed links. I had written many syndicated articles and spread them around the web. At the time, it helped me tremendously. But when Google changed the way they looked at links, they slapped me back down. And they slapped me hard. I lost around 8,000 visits per month after the second update.”

But here’s the thing that makes Andrew such a fantastic student of marketing: he didn’t give up. Even better, he understood what many doctors don’t.

And how many new patients are walking through his door? Andrew now gets an average of five new patients a day, directly from his website.

To make the most of every one of these contacts, Dr. Schneider dedicates one day a week—for him it’s Wednesday—to “make it rain.” To keep the money flowing and his practice and marketing operating at the highest level, the doctor spends each Wednesday writing, taking care of all marketing tasks, and participating in both personal and professional development.

“If there is one thing I could tell other business owners it would be that you must add content to your site on a regular basis. This warning is ever present on the first page of DSS and I’ve been heeding it ever since I started.”

Andrew also warns others about choosing the right marketing firm with the right software. Remember, Andrew is a DIY guy, so for him, it’s paramount that he has the best tool on the market. And for him, it’s DSS.

“I speak at a lot of conferences and I happily say that Foster Web Marketing and DSS provide me with exactly what I need to run my marketing; I recommend FWM constantly. As a doctor—and not an Internet marketing expert—DSS gives me the tools I need to succeed in Internet marketing, all within a program that’s no harder to use than writing a document in Word.”

We are more than happy to provide the education and support Dr. Schneider needs. Andrew is one of our top clients and we quite simply love working with him. If you’re ready to experience the kind of success Dr. Schneider has achieved, call 888-886-0939. We are ready to help you build the business you’ve always wanted. 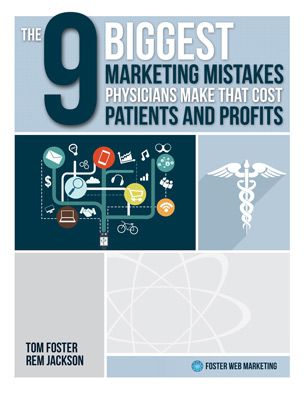