Criminal Defense Attorney Explodes His Practice by Finding His “One Thing”

Nate Amendola, founder of Nate Amendola Defense (www.amendolallc.com), worked as an attorney for a long time before really zeroing on what he wanted to do with his life and his practice.

But, now that he’s found his “one thing,” he’s truly become unstoppable. I think you’re going to get a lot out of this, so keep reading below for the full story!

Nate worked as a corporate lawyer for years at a huge international firm. Sure, he was making money. But, ultimately, he knew he didn’t want to spend the rest of his life just shuffling papers around to earn a paycheck. He wanted to do something that he enjoyed and that challenged him. So, he moved away from the big city and out to Nantucket to see what he could make happen.

It was instantly a great decision for Nate, and it didn’t take long for him to start seeing signs of success in his life and in his business. He was building up a powerful referral network, and he eventually even struck out on his own and opened his own firm.

In a smaller town with less competition, his services were in high demand. In fact, there was so much demand that he ended up doing a little bit of everything!

Litigation, real estate law, criminal defense—you name it, Nate was doing it. He was good at the work, and he liked it. But we all know that you can’t be everything to everyone. It was around that time that he read The ONE Thing by Gary Keller—one of our favorite books at FWM—and it suddenly clicked for him. Instead of being a “jack of all trades,” he needed to home in on his own “one thing” that he could focus on and be REALLY good at.

Nate thought about it, identified criminal defense as his main focus, and cut the other “chaff” from his practice. Looking back, that’s really the moment when it all took off for him. His criminal defense practice started growing beyond Nantucket, so he decided to move his family back to Boston to enlarge his geographic focus—and it’s also what led him to our team at FWM. 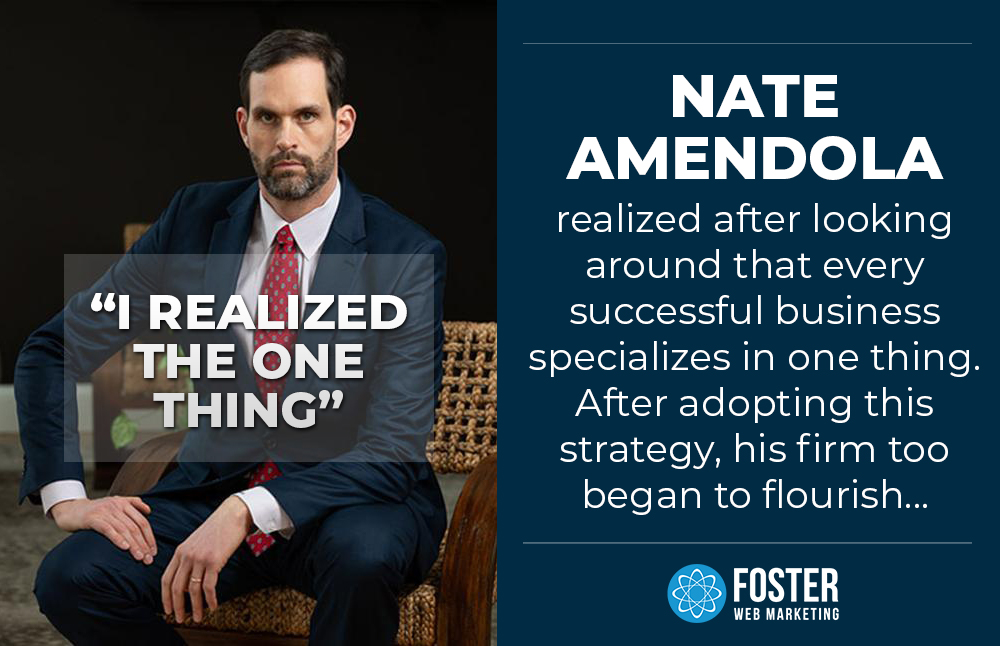 Hiring FWM wasn’t just an impulsive choice for Nate. Like any good lawyer, he did his research, and he took it seriously. He interviewed a bunch of digital marketing companies. He talked to other lawyers, especially those he knew through Great Legal Marketing. Nate started noticing a pattern of all these awesome lawyers—people out there absolutely slaying it—and their association with one digital marketing company: Foster Web Marketing.

Nate tells us that no other marketing companies he talked with really had what we offer at Foster Web Marketing. With us, he could retain control of his marketing while getting whatever expert support he needed. He could still be the master of his own destiny! He could see the Foster Web Marketing system working for his friends and colleagues, in real-time and with real results. So, he set up a meeting with the Director of Business Development Chad Foster, and they hit it off immediately.

Nate appreciated that Chad took the time to listen to him, answer all his questions, and actually make a connection—without making him feel stupid. That’s why he decided to launch his new criminal-defense-oriented website with us, and he says the handoff process was “beautiful.” Everyone he worked with at FWM was timely, professional, and clear about what he should expect and what would happen.

When he got the first round of website content for review, he actually sighed with relief. “I realized that you get it,” Nate says. “I knew I was in good hands.”

Once his finalized website launched, it exceeded his expectations. He and his team were all really impressed with how it looked and what it could do. Nate was especially pleased with the integration options available with our DSS software, as well as the control he now has over his website.

Of course, that was only the beginning. With a conversion-focused website and powerful tools at his command, he was ready to fully embrace his new focus on criminal defense.

At FWM, we want our clients to succeed. So, along with his website launch, Nate also entered our complimentary coaching program.

Nate tells us that he gets a lot out of his coaching calls. It’s where he’s able to develop his ideas and break them down into doable actions. It’s also where he’s introduced to tools and tactics that make his plans go faster and work better. He always knows that he has an expert on his side that he can reach out to for answers and focused guidance—and that alone makes a huge difference for him. Of course, it doesn’t hurt that we also offer robust SEO and marketing services that he can call on when all the work is too much!

Overall, Nate has put the work in to make the most of his partnership with us, and it’s obvious that he’s taken what he’s learned to heart. The Perfect Client Exercise really opened his eyes to the kinds of clients he wants to attract to his practice and what motivates them to convert. He’s also been steadily working through the Marketing Growth Plan and building up his marketing machine, piece by piece. Most recently, he’s been busy with list management, creating compelling email campaigns, and publishing his first law firm newsletter. He writes focused content for his website that we optimize for him, and he hopes to add more video content to his strategy in the future. He’s very happy with his website and our partnership, and he reports that he’s already getting more traction in local search results.

Nate has done everything possible to set himself up for a whole new world of success, and it’s no surprise to us that he’s winning.

For Nate, finding his “one thing” meant putting more energy into the things that really improve his life and his business. It meant he stopped wasting resources by marketing to “imperfect clients” and attracting cases he didn’t really want. He educated himself and asked questions so that he could stop putting his energy into guesswork and start putting it into reliable, sustainable, and measure strategies for success, instead.

I love being able to tell you about Nate’s journey because I think it illustrates something that a lot of lawyers go through at some point in their careers—and it shows you exactly how to overcome it. So, if you’ve ever felt that creeping feeling that something needs to change, be like Nate Amendola and find your “one thing.”

I honestly can’t wait to see what kinds of wins he brings in next!

Do you have questions about marketing your law firm? Do you need expert guidance to cut the chaff and focus on the things that matter? Meet with our team by requesting a personalized marketing analysis or website design consultation, and let’s talk about what’s possible.