Building a well-crafted sentence is as difficult as assembling a complex machine.

Now, that’s not an original observation, but it’s an analogy that endures because it’s essentially true. You can build a very simple and expressive sentence, of course—”I won’t!”—that precisely captures the meaning you want. But as your intentions become more sophisticated, the number of choices you must make expands greatly. A long, detailed sentence— 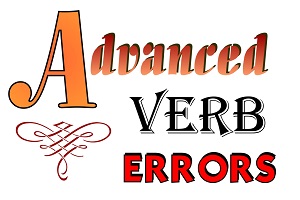 let’s say 20 words of so—can astonish your readers with its communicative power, if you assemble it well.

If you fail to do it well, you may be mocked. Laughed at. Scornfully dismissed in an essay such as this one. Nobody wants that.

The hidden work of content writing consists of locating potential errors and fixing them before they’re exposed to the public. That’s why we proofread obsessively and hire editors to preview our writing.

And, of course, that’s why we keep studying the rules of grammar to anticipate and avoid whole classes of mistakes.

Today the subject is verbs.

The Rules for Verbs: A Quick Review

All other verbs are called irregular because they do not follow this pattern. Sad to say, the irregular verbs include some of the most common, the most expressive, and the most useful verbs we will want to use. Because they don’t have a common template, we have to memorize the principal parts for each irregular verb. Most people have a few irregular verbs that they simply cannot master. Yours may be hang (a regular verb when it means “to execute by hanging,” but principal parts hang, hung, and hung apply when it means “suspend”). As for me, I simply cannot keep track of lay (lay, laid, and laid) and lie (lie, lay, and lain).

Perhaps the most important rule for verbs, though, is this one: only the present and past participle forms can make new verbs by adding suffixes or enlisting “helper verbs.” This is forbidden for the simple past form. Of course, for regular verbs, the simple past and the past participle look identical, so it’s not easy to demonstrate that this rule is being followed. Irregular verbs, however, often use different words for the past and past participle forms, so errors are really obvious.

Let’s begin with one of the most notorious of those errors.

You will remember that transitive verbs are words that contain the idea of action being transferred to some object or person. The thing that receives the action will be a pronoun or noun phrase called the direct object. In the sentence “Mr. Green struck Professor Plum with the candlestick in the Conservatory,” for example, “struck” is the transitive verb and “Professor Plum” the direct object, poor chap.

An action sentence such as this one can be rewritten to make the direct object become the subject of the sentence, shifting the emphasis from the former subject. In grammar jargon, this is called converting the sentence to the passive voice. Here’s how it works:

Following these rules, our example sentence would transform into a passive version as follows: “Professor Plum was struck by Mr. Green with the candlestick in the Conservatory.”

Passive voice is intended to be more reserved and dispassionate than the active voice. Many writing experts see that as a disadvantage, but academic writers, attorneys, and medical writers seem drawn to the passive. That’s perfectly fine as long as care is taken not to overuse the style. And, of course, it’s essential you use it correctly.

Oddly enough, when lawyers write about dog bite injuries, the passive voice often gets mangled. Look at these examples of actual content writing:

See the mistake? In each instance, the writer used the simple past form of the verb “to bite”—bit—instead of the past participle bitten to create the passive phrase. It’s wrong. It will sound wrong when you speak the sentence aloud. A reader who comes upon this mistake might think the writer is incompetent or condescending, and that reader may take his business elsewhere.

Now take a look at this gem of online news reporting from People magazine:

What went wrong here? The writer attempted to show the sequence of events by using the simple past tense in the first clause and the past perfect in the second clause. That’s an admirable ambition—but the writer botched it. “He had drank” is built around the simple past form of the verb “drink,” and we know that form is never used to build other tenses. We need the past participle instead: “he had drunk.”

Tension in Sequence of Tenses

This one’s subtle but instructive. The opening “as soon as” indicates that the two parts of the sentence happen at the same time—but the first clause is written in the simple past tense, and the second clause in the simple present. This creates an unresolved conflict between the sentence’s grammar and its meaning.

One (and only one) of the verbs must change: either “took” must become “takes,” or “experiences” must become “experienced.” We don’t have any context here, so the choice can be whatever you prefer in your role as editor. In a real-world example, we would look to the surrounding sentences to gather what tense should be favored.

This Sentence No Verb

The headline immediately above, taken from an epigram by Douglas R. Hofstadter, triggers an immediate chuckle. But then you get to thinking about it, and you recognize that the very idea of “sentence” in English is bound up with the topic of verbs. It’s very difficult to write a meaningful sentence without a verb. If I may reference the mechanical analogy that began this essay, the verb is the generator or battery that powers up all the more interesting sparkly bits in the sentence.

If you don’t have the right energy source, your sentence isn’t going to function as you planned. Keep your verbs tuned up, and your sentences will soar.

This essay has been one in a series of discussions about grammar, usage, and writing techniques produced for people who write content pieces for professional websites.