Mrs. Beedle, my fourth-grade teacher, was one of those no-nonsense, old-fashioned educators convinced that English always has perfectly sensible rules for every situation (we’ve talked about Mrs. Beedle before). 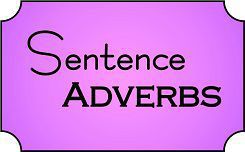 When it came to teaching us about adverbs, Mrs. Beedle kept the lessons simple. She didn’t find adverbs especially interesting. As she refined her lesson plans year after year, she kept trimming back the time she spent on adverbs. Eventually, she was down to only two sessions to teach her students everything they needed to know about adverbs.

And one of those lessons was wrong.

Tales of a Fourth-Grade English Teacher

Lesson 1: How to recognize adverbs

“Most adverbs,” Mrs. Beedle would tell her students, “can be identified because they end in the letters -LY. They’re formed by taking an adjective and adding the -LY suffix to the end.” Then she would ask members of the class to suggest adverbs ending in -LY, and she would write each one on the blackboard: purely, truthfully, oily, vaguely, saucily, generally, and surreptitiously. (Yes, I suggested that last one. I was a peculiar child and a bit of a show-off in fourth grade. Mrs. Beedle sighed a lot whenever I raised my hand.)

“But, class,” Mrs. Beedle stressed, “Not all the words that end in -LY are adverbs.” And then the next panel of the blackboard would be covered with more examples—this time, adjectives (early, burly, silly, lonely, friendly, lovely, holy, and smelly), nouns (bully, ally, belly, family, monopoly, butterfly, and the proper nouns Wally, Kelly, Billy, and Polly), and verbs (reply, multiply, fly, dally, and bully again).

And finally, Mrs. Beedle positioned herself at the final panel of the blackboard. “Some of the most important adverbs don’t end in -LY at all. Can anyone think of any?” When there were no suggestions, she wrote this list:

Lesson 2: What adverbs do

Mrs. Beedle’s second lesson was all about how adverbs function in sentences. “Just as an adjective can modify—or refine the meaning of—a noun, an adverb will modify a verb, an adjective, or another adverb,” she told us. “They can’t apply to any other words. Adverbs clarify the conditions for the words they modify. They can specify time, or place, or sequence, or some other quality.”

Then she gave example sentences:

Unfortunately, Mrs. Beedle left out an important function of the adverb. In addition to providing a special refinement for other parts of speech, an adverb can modify a sentence as a whole. This special use is called the sentence adverb, reasonably enough. Commonly, the sentence adverb will appear as the first word in a sentence and be followed with a comma.

Want to see the sentence adverb in action? Let’s take a look at some excepts from actual website content:

At this point, you’re saying to yourself, “Wow! I’ve been using sentence adverbs all these years and didn’t know they had a special name.” Precisely! A native speaker of English acquires a commonsense understanding of grammar and can usually construct well-formed sentences without too much effort.

The Great Sentence Adverb Controversy: Dare You Use This Word?

Obviously, not all adverbs are suitable to be used as sentence adverbs. “Obviously” works, for example, but “juicily” would be an odd and unworkable choice. Truly, therefore, ultimately, honestly, actually, certainly, incidentally, clearly, and many other words have often been welcomed as sentence adverbs.

But one sentence adverb has provoked an enormous amount of controversy: hopefully.

Now, the word is a perfectly good one and has long been used in the sense of “in a hopeful manner,” as in this sentence: Ella raised her eyes hopefully, certain that Julius was about to propose marriage. Sometime in the 1960s or early 1970s, though, hopefully started to be used as a sentence adverb to convey the meaning “I hope.” The sentence “Hopefully, you will enjoy this pie I baked” attempts to avoid the direct emotional commitment of “I hope you will enjoy this pie.”

English purists were aghast. They claimed that the new usage was ambiguous; after all, the example sentence could also mean “You will enjoy this pie in a hopeful manner.” They found the new usage insincere because the writer didn’t communicate his full intentions. But, one after another, language authorities decided the modern use of “hopefully” to be acceptable, with the Associated Press finally nodding approval in 2012.

I’ll admit I’m not a fan of “hopefully” as a sentence adverb, at least in written text; it’s okay for informal conversation. And yet I often find myself agreeing with reformers who say it sounds stuffy and unnatural to rephrase a sentence to begin, “It is to be hoped...” I still encourage new writers to avoid “hopefully” whenever possible, but I just sort of sigh when they ignore my advice.