Pointers for Writing About Compass Directions 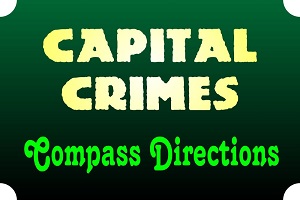 We have noted before that writers love to overuse capital letters. There seems to be something so magical about putting random nouns, verbs, and yes, even adjectives in upper case that normally prudent writers throw all caution to the wind. Staid and sober essays become All Capitals, All The Time.

So what’s the harm? I hear you ask. Precisely this: when the restraint of formal written English is thrown away for a carnival atmosphere in which anything goes, the persuasive value of the content plummets. You’ll recall that readers—even those who aren’t grammar mavens—have an excellent ability to detect when grammar rules are being broken, and bad grammar drives away clients and customers.

The lesson, then, is to show restraint when using capital letters. Specifically, today’s lesson is about using upper case when referencing compass directions—an error I have been noticing more and more often online, especially when content writers present driving directions to their business locations.

Cardinal Rules for the Cardinal Directions

The four primary points on a compass—east, north, south, and west—are known as the cardinal directions. Between them, we will find the ordinal or intercardinal directions, such as southwest, west-northwest, and an infinite number of other descriptors.

Some writers take the simplest approach and capitalize all compass directions willy-nilly. We have a couple words for writers like this: “lazy” is one. So is “wrong.” English actually has some fairly concise rules about capitalizing compass directions. I can boil them down to a list of three:

Note, in particular, that compass points used in isolation shouldn’t be capitalized.

Let’s examine a few helpful examples, shall we, beginning with those where capitalization is appropriate :

Compare those with these instances where no capitalization should be used:

Each of the compass directions has an associated adjective, too: think southern as the counterpart to south. Surprisingly enough—because we’re used to English having frequent exceptions to the general rules of grammar—directional adjectives follow the same guidelines we use for compass directions. That means we will most often use lower case unless special circumstances apply.

Once again, our examples start off with a few cases where capitalization is required:

Examples where capital letters should be avoided include:

Moving Beyond the Compass

The same principles for capitalizing directional and geographic references work just fine as we move beyond compass directions. In most cases, you will capitalize only when referring to a well-defined and well-known place name. So, if we wanted to test how the word “central” is used, we would use uppercase to refer to “California’s Central Valley,” but we’d opt for lowercase to say that “the tornado watch for central Illinois expires at 7 PM.”