It was after midnight when they rang my doorbell. I opened the door a crack and they showed me their badges. Federal, of course, but I knew that already; they always travel in pairs.

“You taking me somewhere?” I asked.

“The National Archives...” the male one began, I guess because he was feeling left out. He shut up after a glare from his partner.

“Right,” I said, as I grabbed the overnight bag I leave by the door for just these emergencies. “Let’s go. After all, it’s a matter of national security, isn’t it?”

“Aren’t they all?” the senior agent asked rhetorically, pointing me to the limo.

Six hours later, I was hustled into one of those anonymous meeting rooms that seem so plentiful in Washington. Five other people were already standing around the sturdy oaken table. I recognized the Librarian of Congress: a snappy dresser and surprisingly skilled dancer.

“You’re here at last,” said the Director of the Bureau of Engraving and Printing. He pointed to the document on the table. “Can you help us?”

I looked down at the page. 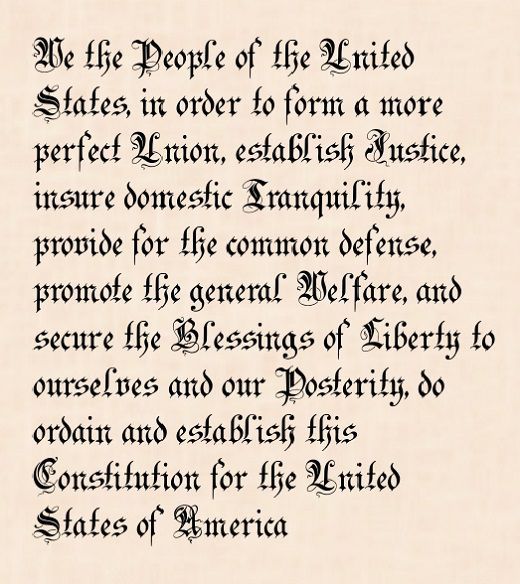 Okay. I could tell this was going to be a tricky one.

What’s With All the Capital Letters?

It’s important to remember that English didn’t have formal capitalization rules until the early 18th century. Even by 1787, when the U.S. Constitution was drafted, it was still a common style to capitalize most nouns, a practice held over from German’s influence on early English. In the decades since, the convention has shifted, and fewer words are capitalized today.

That has created a problem for some business managers and owners who, even today, find it hard to adjust from their professional writing traditions in order to write for a general audience. For instance, attorneys may be used to capitalizing words such as Federal, State, Court, Government, Appeal, and many others, if that is the custom in their jurisdictions; but when they use the same style to write professional web content, it just looks silly.

At other times, I’ve encountered well-educated business owners who simply never learned the rules for capitalization. Their writing can be meaningful—sometimes inspired—but it’s also prey to what I call Random Capitalization Disease. When the upper case is used willy-nilly throughout the text, at best the reader becomes distracted. More often, ignoring capitalization rules (or any other basic grammar precept) means a loss of credibility for your website content.

Does this really happen? You bet. Here’s a handful of actual capitalization mistakes I have noted on marketing website pages in recent weeks:

The rules of using capital letters in general prose text are pretty straightforward. The basic principle says that most words should be in lower case, and a few exceptional words will be capitalized. The following list tells you what needs to be put in capital letters, and it’s sorted in roughly the order of importance:

Watch as Headline Style Turns the Rules Upside Down

We must remember that headlines, titles, subheadings, and the like are also parts of standard prose, but they use an entirely different set of rules. The cramped typography of early broadsheet newspapers meant that something had to attract the reader’s eye to the start of new articles. A different set of capitalization conventions—now known as “headline style,” “title case,” or “capital case”—evolved to fill that role (along with changes in typefaces and weights).

The basic principle for headline style is that most words will be capitalized; note that this is exactly the opposite of the fundamental assumption for the main text. Then apply the following rules:

doesn’t it look Peculiar when capitalization rules ARE ignored?

You want your website content to be distinctive, sure. You don’t want to be notorious for quirky capitalization, bizarre usage errors, or mangled grammar.