Lowest Comma Denominators: Learn These Three Basic Functions of the Comma by Heart

Is the comma the most important punctuation mark?

It may well be, by whatever yardstick you use to measure importance. In terms of how often it appears in prose, the comma is neck-and-neck with the period. However, the period has only a few functions in English. By contrast, the comma has dozens and dozens of functions, and each one is highly variable according to circumstances— 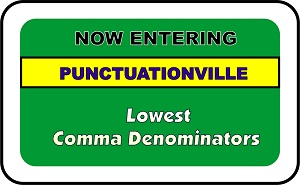 Can any single online article teach you all about using the comma? Nope. Can’t be done. I am not even going to try.

But my mind keeps circling back to that claim about the comma being the most important punctuation. One of my goals in these essays is to give you information you can apply right away in your business writing. Commas are so pervasive that anything you learn will strengthen your skills not only in writing website content but also in crafting letters, memos, and other forms of office communications. Commas are just that important. I can’t say, “Sorry, you are out of luck,” and turn you away at the door like a disappointed Halloween trick-or-treater.

So we will compromise. Today, we will look at three specific situations where it is crucial to master the comma. You might find these a review or reminder of details you already know; even then, I hope to provide a fresh perspective on using the comma.

Conditional Sentences: “If...Then” and Beyond

If you are a fan of grammar jargon, we can explain it this way: “if” is a subordinating conjunction. Inserting a comma is the most efficient way to separate the subordinate clause from the main clause.

We can demonstrate how essential the comma is by looking at some real-world sentences I recently edited:

Hard to read, right? Without punctuation signposts to help us see where the conditional part of the sentence ends, we may have to read the whole thing a couple of times before we comprehend the meaning.

It is worth noting that the same rule—use a comma as a separator—still applies even if the word “then” is implied rather than written, as in these examples:

Similarly, the conditional part of the sentence can omit the word “if” (often using the subjunctive mood instead). The rule still applies:

No issue stirs up disagreement among grammar experts as the use of commas in lists. Everyone agrees that the first few items in a list should be separated by commas. Those who favor what is called the serial comma or Oxford comma insist that a comma should also follow the next-to-last item in the list, just before the conjunction “and” or “or.” For example:

Other experts—including many newspaper style guides—insist that the final comma be omitted as unnecessary:

I am firmly in the camp favoring the serial comma. Even if the sentence is clear enough without that final comma, including the punctuation mark does not waste a significant amount of space, nor does it delay the reader for long. And the comma is absolutely required to clear up ambiguity when individual items in a list might include an appositive—a noun phrase that renames another noun next to it. For example:

To how many people did Dolores send letters: three, or two? The punctuation implies that Dolores’s brother may be the leader of the United Nations. Then again, maybe he is not. Without an Oxford comma, the sentence is ambiguous. Adding the comma adds clarity.

In grade school, we learned that adverbs are words that usually modify—or shade the meaning of—adjectives, verbs, and other adverbs. Many adverbs end in the letters –ly, so we immediately recognize loudly, lustily, enormously, parenthetically, gracelessly, sincerely, and many others as belonging to the set of adverbs. But many other adverbs lack the –ly suffix, including such common words as very, however, never, how, just, next, and sometimes.

Let’s take a peek at some sentence adverbs in use:

Did you notice the element in common? That’s right: in every case, the adverb at the start is set off from the rest of the sentence by a comma. Now, some experts will tell you the comma is optional if the sentence is very short. But look at an example that’s just three words long:

Even with so brief a sentence, a comma would be helpful by signaling emotional distance between the adverb and the main clause. You will never go wrong by including the comma after a sentence adverb, and the comma can provide a nuance that’s not available by any other means.

The Joys (and Heartaches) of Punctuation

We have just scratched the surface of what commas can accomplish, and we are sure to return to the topic in the future. Like other punctuation marks, commas can refine the meaning of your words. More importantly, they can pare away ambiguities to make sure you are communicating your intended meaning to your readers simply and directly. Clarity in writing is not just a lofty ideal: it shows that you respect your readers by refusing to eat up more of their valuable time than is necessary.

If you are the boss of a small business, your employees will forgive any lapses in good writing. Even then, you might be surprised how efficiency can rise when you expect clear, grammatical writing for in-house communications. If you are writing for an audience beyond your workplace walls—anything from letters to customers to updating your business website—then you will be judged on your command of English. Your communication skills will directly affect the success of your business.

Oooh. That is a scary thought.

Part of the mission here at Foster Web Marketing is to foster (no pun intended) good business writing. Our grammar blog series is just one part of that effort. We also give away books jam-packed with tools for writing excellence. Do you need something more? Use the comment function on this page to let us know what topic you would like to see explored in a future column.