Making Nouns Plural? It Can Be Harder Than You Might Think

Rough counts indicate that nouns are among the most common words in both conversational and academic English, running well ahead of verbs and just a little behind pronouns. You might deduce, then, that English speakers ought to be very skilled at handling nouns, as measured by routine tasks such as making nouns plural. 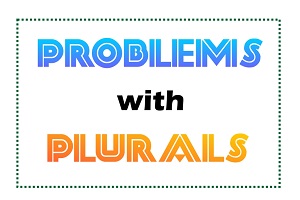 Such a deduction would be dead wrong.

People who speak English as their primary language have just as much trouble forming plurals as they do handling singular and plural pronouns or forming the past tenses of common verbs.

However, these are skills that can be mastered. In today’s essay, we will look at some frequent errors in forming plural nouns and discuss strategies you can use to strengthen your command of plurals when writing web content.

Fortunately, we can spot a few recurring models for nouns that resist plural forms. It is surprising but helpful to discover regular patterns among the irregular nouns. Let’s see how those patterns help us get the grammar right.

There’s no secret to memorize here: each of these nouns follows its own peculiar rules. We will just have to memorize these. The good news is that these words are very frequently used, and most people find learning these exceptional plurals relatively simple. The bulk of these are words for people (child, man, wife, woman) or animals (calf, goose, mouse, ox, wolf). Many of the rest describe relationships (half) or parts of a whole anatomy (foot, leaf, tooth).

This category also requires rote memorization, but the words are relatively uncommon. Many are drawn from literature, the sciences, or from Latin or Greek roots. A brief list would include:

Here, we mostly will be concerned with words that derive from the ancient classical languages—primarily Latin and Greek. Those words retain their ancient plurals, but also have gained new modern plural forms. Over time, we can expect to see the different plurals reserved for distinct meanings, as mediums is used today to refer to psychics and fortune-tellers and media is used for forms of mass communication.

Other nouns with two forms include:

Let us also remember the words which use secondary plural forms only when talking about classical literature, such as:

When pluralizing names, we usually begin with the conventional English rule to append -s to most words, or -es if the base noun ends in the sound -s, -sh, -ch, -x, or -z. Thus:

Unlike common nouns, though, we never change a final -y to -ies when making a plural proper noun:

Nouns With No Singular Forms

A few nouns have lost their singular forms. These are mostly terms for clothing, apparel, and personal items that come in pairs, such as eyeglasses, scissors, trousers, and tweezers. The interjection “congratulations!” also never appears in a singular form.

Using the Possessive Instead of the Plural

This error is so widespread that we already devoted a column to the difference between plurals and possessives. A quick summary: if you are adding an apostrophe, you are not creating a plural noun. There is one exception: single letters are pluralized by adding -’s, as in the command “make sure you cross all your T’s.”

Plural Nouns That Are Evolving Into Singular Nouns

The word datum—a fact—is the singular of data, a collection of facts and statistics. Similarly, agendum—something scheduled to be done—is the singular for agenda, a to-do list. But both data and agenda are also used as singular terms these days, and I think that is okay. Both words are in the process of casting off their original Latin singular forms, and it is acceptable to use agenda and data either as singular or plural, as long as your meaning is clear.

Plural Nouns That Really Continue to Be Plural, No Matter What Other People Say

In contrast to the words covered in the last sentence, there are two more English nouns derived from ancient Greek that should continue to be considered plurals. A lot of people use phenomena and criteria as singular terms, but each has a true singular form (phenomenon and criterion, respectively) that remains in common use. Hold the line on these two, folks.

A Bumper Crop of Nouns

Our discussion here demonstrates that nouns are more complicated than most people realize—a claim that can be made for English grammar as a whole. As a writer, you have authority over the grammar you choose to employ. If you seem unable to use English effectively, your readers may assume you are also inept at the practice of law or medicine, or whatever your professional skill might be. Your ability to write well is therefore essential for your professional success.