June Content Roundup: For Some Sites, Google Brings on the June Gloom 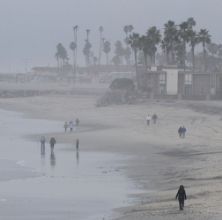 If there’s one thing to know about southern California, it’s to not plan a trip to the beach in June. Why? Well, contrary to what people may think about June being an AMAZING month to visit the beach, the marine layer effect frequently causes cloudy skies, fog, drizzle, and cooler temperatures to southern California beaches, commonly referred to as “June Gloom.” (If you didn’t know that already, you’re welcome for saving you from making some disastrous vacation plans!)

While SoCal residents were suffering from gloomy skies, in NorCal, Google had its hand in the mix as well, which caused quite a bit of June Gloom across the web; however, while the June Gloom in SoCal has quickly dissipated, the gloomy skies that Google has brewed up are here to stay—sealing the fate of some spammy sites.

On June 12th, Google rolled out its 3rd version of the PayDay Loan algorithm, referred to as PayDay Loan 3.0, which specifically targets very spammy queries like “payday loans” and “casinos.” This differs from PayDay Loan 2.0 (launched in May), which targeted spammy sites, such as pornography and casino sites. This algorithm is unrelated to Panda and Penguin, so don’t be alarmed. The overall takeaway of this one is that if you’re not doing anything spammy, you should be “A-OK.”

Last month, we talked about Google’s Panda 4.0 algorithm update, which was aimed at weeding out sites with poor-quality content, and—unexpectedly to many—press release sites have been hit hard. Since the update, BusinessWire, PRNewswire, and PRWeb have experienced drops in search visibility of approximately 60%, 63% and 71% respectively.

Do you love seeing your smiling headshot in Google beside articles that you’ve authored? Well, if you haven’t already noticed, it’s no longer there. Wait…what? Why? Well, according to Google Webmaster Trends Analyst John Mueller, Google has decided to move back to a "less-cluttered design” and has removed author images from search results.

As Google 1:21 states, “Naked came I into Google and naked shall I return tither. Google gave and Google hath taken away.”

Now, not all changes from Google this month are gloomy; some are designed to make your life easier! Before the June Gloom puts your mood into a tailspin, check out the new, helpful changes from the Google weather center.

Google Is OK With “OK Google”

Google has announced that all Android-powered devices which run KitKat are now integrated with new voice-controlled search, referred to as “OK Google.” By speaking a question or request starting with the phrase “OK Google” on your android-powered device (whenever the screen is on, the device is charging, or even from the lock screen), you’ll get answers quickly. For example, if you say, “OK Google, I need a DUI lawyer,” you’ll be shown a list of DUI lawyers in your area.

Pretty nifty for those with an Android-powered device (are you trying it right now?), but on another note, I wonder how much Kit Kat sales have risen since this version was named. I’m getting a little hungry myself… Anyone? “Break me off a piece of that Kit Kat bar!”

Up Your Local Business’ Presence With “Google My Business”

Google has announced yet another addition to the seemingly ever-growing group of Google pages for your business. Along with Google Places for Business and Google+ Pages Dashboard, the search-engine giant has now announced the creation of “Google My Business.”

Does this news make your head spin? If so, let us try to make it a little easier for you. Repeat after me: “Don’t overthink this change.” If you previously managed your business information with the Google+ Pages Dashboard or Google Places, your account will be automatically upgraded to Google My Business.

A Panda Walked Into a Bar…

If you’re still feeling like it’s a zoo around here, we can help! (And, let’s admit it, when you’re reading about Pandas and Penguins eating Kit Kat bars and taking out PayDay loans from Hummingbirds, it’s hard to feel like you’re sane!) Check out this article from the Moz Blog if you want to read (in great detail) about the differences between Panda, Penguin and Hummingbird.

Obviously, Google has totally dominated the conversation this month. (But what’s new? Google controls the US market share of all search queries, with nearly 68%!) However, we hope that one thing shines through to you: If you play by Google’s rules and stay away from spammy, black-hat SEO techniques, your site will stay grounded while the others roll away with the fog.

by Uriah Binegar
Connect with me
2 Comments
Hi Deborah, I am so glad to hear that these posts are helpful for you! There are always so many changes to keep up with; it's our goal to make them a bit easier for everyone to understand. Keep an eye out for the article about July changes, coming soon. There have already been quite a few, including some huge changes from Google just last week. (They really keep us on our toes, don't they?) Best, Hannah
by Hannah McNaughton July 30, 2014 at 02:35 PM
Thank you Hannah for breaking it down for me... so much info... so many changes and of course there is that task called daily work that gets in the way of me staying on top of trends on the web ;) Your posts are important to me!
by Deborah Montagna July 30, 2014 at 01:56 PM
Post a Comment