Okay, let’s start with a show of hands. Who out there remembers what a direct object is?

Hmm...about what I expected. It is always the same five people in the back row, isn’t it? It seems a brief refresher lesson is in order, then.

In a sentence, a direct object is a noun phrase or pronoun that receives the action of a verb; it is the thing that is acted upon. Specifically, the type of verb used is called a transitive verb, because it contains the idea of transferring action. Many verbs can act as either transitive or intransitive verbs, depending on the circumstances. Let’s see some examples to make this all clear:

The Next Piece of the Puzzle

Now that we are all on the same page concerning transitive verbs and direct objects, we are ready to look at the real topic of this essay. What would you make of the sentence, “I hate Jim singing loudly in the shower”?

“Hate” is obviously a transitive verb here, but it is perplexing to figure out what the direct object might be. Perhaps Jim? Let’s try eliminating all the unnecessary words in the sentence and see what happens. Condensing the sentence to “I hate Jim” seems a rather harsh judgment and not a good summary of the idea expressed by the full sentence.

Could “singing” be the direct object, then? As used in this sentence, “singing” is an odd word. It is called a gerund, a form of a verb acting as if it were a noun. Most often when we add the “–ing” suffix to a verb, we get a present participle, which acts like an adjective. For example, “We were entranced by the singing waiters at the new Italian bistro.” But a gerund is also perfectly acceptable in English grammar. If we cut our test sentence down to “I hate singing,” that seems to better reflect the intended meaning. “Singing” is the legitimate direct object.

What, then, are we to make of the word Jim? Could it be an adjective, modifying “singing”? Not likely. Proper nouns can function as adjectives, but all the examples I can find only work when the proper noun determines the time or season for the related noun: Christmas tree, March Madness, Sunday newspaper, Halloween candy, and so forth. So much for Jim. It is not an adjective here.

The great lexicographer H. W. Fowler (1858–1933), author of the classic Dictionary of Modern English Usage, was particularly vexed by this construction, which he named the fused participle. He argued that the whole dilemma boils down to a grammatical error: the word that was not the gerund should be a possessive. Thus, our sentence would transform into “I hate Jim’s singing loudly in the shower.”

If sentence diagramming were still in common use, we would parse the sentence something like this: 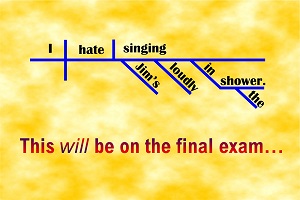 Fowler’s animus against the fused particle shows the error was common over a century ago. It still flourishes in casual conversation today. Few people would see anything wrong with “Do you mind me asking a question?” or “We appreciate you taking the time to share your concerns” in an informal setting. However, if you are writing professional website content, you will want to adhere to the best practices for grammar. That means avoiding the fused participle whenever possible.

And yet, let’s look at some actual excerpts of website content I have seen over the past several months:

Each one of those sentences has a fused participle. Now that you are alert to them, you may wince when you spot one.

Can Fused Participles Always Be Avoided?

Almost all rules of English have exceptions. So here’s my final rule for fused participles: Avoid the fused participle, except when your effort to eliminate one would interfere with your readers’ comprehension. That is pretty much the rule of thumb we have been applying all along. Write as best as you can according to the rules of English as you understand them. Good will—and purging the worst mistakes from your writing—will go a long way toward building rapport with your readers and gaining their trust in your brand.

Want more tips on website writing? Order your free copy of The Foster Web Marketing Clients’ Guide to Great Content. This is the book that takes you step-by-step through writing compelling articles that will convert readers into clients for your law firm, medical practice, or other business, and you can order it today without any obligation.

by Uriah Binegar
Connect with me
2 Comments
I think a lot of people may have forgotten the technical terms, but they retain a sense of the rules of grammar. And that's okay! Third grade was a long time ago for most of us, but as long as we can get the answer right in the end, we no longer have to worry about the jargon. Thanks for reading, Duke!
by John Prager August 31, 2017 at 10:15 AM
Great read once again John! Even though it's hard for me to admit that I forgot all those things over time, this post was a really great refresher :)
by Duke Vukadinovic August 31, 2017 at 03:55 AM
Post a Comment