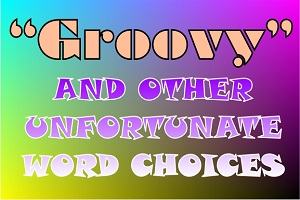 Do you remember when the word “groovy” was popular?

Probably not. You would have to be of a certain age. Around 1967, though, “groovy” was THE slang word to use. Today’s modern equivalent would be “awesome”; around 1950, “peachy keen.” It’s not merely that the usage is stale; in their time, these words were so overused that they became hollowed out or bleached of all meaning. “Awesome” used to mean “capable of evoking awe.” Nowadays, it merely signifies that the writer or speaker is vaguely supportive of something, like those awesome hot dogs on a stick from the food court at the mall.

The Perils of Hollow Words. Also, Far Too Much About Sheep

Let us assume you are the person in charge of producing high-quality content for your business website. There are two reasons why you don’t want to use today’s slang or trendy phrases to make your writing sparkle:

You want your online writing to have future value. The very best articles and blog postings are what we term evergreen content because they will have imperishable worth to your potential clients. But if you salt your writing with words that will soon be considered out of fashion, you sacrifice the enduring quality that is your goal.

Shooting Ducks in a Row

Okay, now we’re getting to the fun stuff: the list of overused phrases that once were vital metaphors and now only weigh down your content.

Sometimes, a great author can take unpromising material and make it sing. For instance, look at how Shakespeare makes a mixed metaphor sound absolutely perfect in Hamlet: “…to take arms against a sea of troubles, and by opposing end them.” One does not battle a sea with weapons, even the “slings and arrows of outrageous fortune,” yet Shakespeare’s genius is sufficient to make it all hang together.

Of course, he was writing original material, rather than borrowing the tired catchphrases of his day. Neither you, Gentle Reader, nor I have that level of talent, but we can at least avoid phrases such as these:

Fresh ideas will nourish the readers who visit your law firm, medical practice, or small business website. But you do not have to express those ideas in highfalutin language or today’s trendy jargon. Favor simple words that express your ideas clearly and succinctly. Yes, you can play a little with language if you believe that will amuse your audience (and if wordplay suits the tone of your article), but showing off shouldn’t be the main focus of your presentation. Honest communication is the essential part.

Need help? Foster Web Marketing is ready to give you a hand with content writing at every level, from supplying tips on usage and grammar to providing customized pieces to post on your website. Give us a call or use the quick contact form on this page.

And while you’re at it, consider sharing your own point of view in the comments to this post. What stale buzzword or trendy cliché do you find most annoying—and what do you do to make sure that phrase never shows up in your writing? We’re all waiting to hear from you!