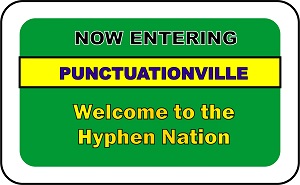 The hyphen. Just a tiny tittle of a horizontal line, easily overlooked in a sentence or a paragraph. How complicated could that be?

Oddly enough, a bit of punctuation that’s easy to write isn’t necessarily easy to use properly. Writers love to misuse hyphens…lots and lots of hyphens. That’s a pity, especially for those writers responsible for producing elegant online content for professional websites. Punctuation errors—just like grammar and usage blunders—disrupt the reader’s experience and water down the credibility of the whole business website.

In short: if you want to write well, learn how to use the hyphen correctly.

The Handy-Dandy Guide to Hyphen Hijinks

The good news is that the hyphen really has only three common uses, and as a web content writer you care about only two of those. Let’s begin by reviewing the three primary functions of hyphens.

#1: Hyphens build composite adjectives that appear before a noun

A composite adjective (also called a compound adjective) is a group of two or more words working together to describe a noun. We use hyphens to join these words together to show they’re working as a unit. Examples:

It’s worth noting that, almost always, the hyphens are not used when the description follows the noun. For instance, your promotional call to action may say “our well-prepared podiatry team is ready to ease your foot pain,” but the hyphens would be omitted in “our podiatry team is well prepared for any emergency.”

Finally, when a series of two or more composite adjectives share a common final term, it’s conventional to use a format called the “suspensive hyphen.” The (different) first parts of each element will appear with a hyphen at the end, and the final composite adjective of the series will be hyphenated as usual. This is most commonly encountered when numbers are involved. A handful of examples will show how it’s done:

#2: Hyphens appear at the end of the line to avoid a ragged right margin

This is the use of the hyphen you shouldn’t worry about too much. Text justification is rarely a major concern for online writing; because the text has to be readable on a variety of different devices, it’s become common to let the device make the best fit of words on the screen and not to obsess over perfectly aligned right margins.

You may be more concerned about fully justified text if you are writing reports or promotional books for your customers or clients, but even then the typesetter—not the writer—is primarily concerned with the final layout decisions.

Hoo boy! In English, what counts as the conventional spelling of a word or phrase is always in transition. A common pattern is for two or more separate words to become a hyphenated compound, and then evolve to lose the hyphen; thus, electronic mail became e-mail, which became today’s email. There isn’t always a recognizable pattern or rule to apply to determine whether a particular phrase should be hyphenated; one must either memorize the list or consult a dictionary.

That being said, there are a few common patterns where one may expect hyphenated words:

It’s a sad-but-true observation that, if you use your hyphens perfectly when writing, nobody will notice. On the other hand, any error will be spotted promptly. Lest your website become mocked, avoid these common errors:

Don’t use a hyphen instead of a dash.

And certainly don’t try using two adjacent hyphens to simulate a dash. Hyphens and dashes look similar, but they have differing functions; respect those differences by using the right punctuation mark for the job.

Don’t use a hyphen for most adverb-and-adjective combinations.

When either the adverb “very” or any adverb ending in “-ly” precedes an adjective, there is no need for a hyphen—even if a noun immediately follows. The adverb provides the same binding power that a hyphen gives to composite adjectives, so an actual hyphen isn’t needed. Examples: easily deluded pirates, dangerously reckless driving, very advanced mesothelioma, legally liable truck driver, thoroughly experienced medical team; but compare with a too-hasty divorce (“too” is an adverb that doesn’t end in “-ly”), a well-meant apology.

Hyphenate the phrase when an age is used as a descriptive adjective before its noun: a 33-year-old concert violinist; the three-month-old infant in the car seat. Do not use hyphens when the adjectival phrase is remote from the noun: my daughter is three months old. But, if the age phrase is being used as a noun rather than an adjective, it does use hyphens: You have the artistic talents of a six-year-old.

It’s always fun to look at actual content writing that has crossed my desk recently. I don’t want to embarrass the writers, so I have edited out some identifying details. Please do not snicker.

You Are Now Leaving the Hyphen Nation. Please Proceed Carefully

To be sure, mastering the rules for punctuation is just an early mile marker on your journey to creating excellent website content. Command of an expansive vocabulary used well will speed you on the way, but won’t get you to your destination by itself. Great content requires you to apply a dozen proficiencies—or more!—all at once to appeal to your readers intellectually and emotionally.

by Uriah Binegar
Connect with me
3 Comments
Great article! I would hyphenate Real-World Examples in your heading above.
by Marilyn December 12, 2020 at 01:53 PM
Great question! In this case, yes, you would hyphenate "real-world" because it is a compound adjective describing "issues."
by Molly March 6, 2020 at 09:46 AM
Would you hyphenate "real world issues"?
by gina h April 24, 2019 at 01:38 PM
Post a Comment