Is it True That “All Press Is Good Press,” Even When the Reporter Can’t Count?

Around the world, the new Apple iPhone 6 and iPhone 6 Plus have been flying off the shelves. In fact, the company announced record-breaking numbers, selling 10 million during the phone’s launch weekend. However, all of this success hasn’t been pretty. 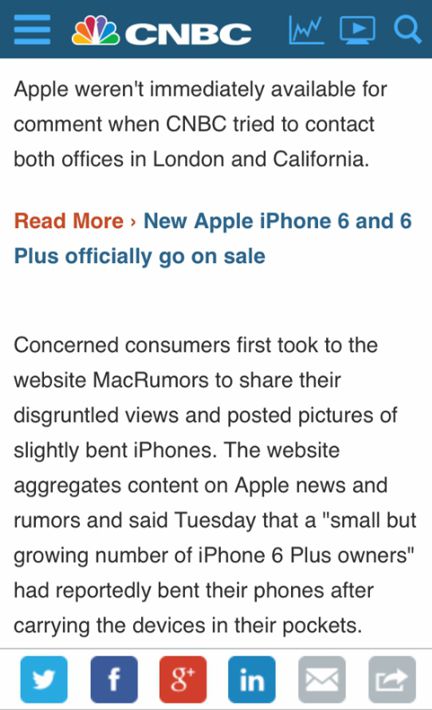 If you haven’t heard, the new, larger iPhones have been under some scrutiny because they have a flexibility issue. And by a flexibility issue, I mean that some of the phones, especially after being carried in pockets, have bent. Apple’s stock has been hurt by these reports, which shows the power of negative reviews on your company’s reputation. (Take note!) But that’s not why we’re here; we’re here for the grammar.

Watch Carefully. How Many Apple Do You See?

In a recent CNBC report about the phones, a sentence stated that “Apple weren’t immediately available for comment…” Wait a second. “Apple weren’t”? Shouldn’t that be “Apple wasn’t…”? Is CNBC right? Let’s examine.

Are Companies Singular or Plural?

What do you think?

A company, whether “Apple” or “Johnson & Johnson,” is singular and takes a singular verb and pronoun (it, not they). The same goes for partnerships, or—in a case we’re very familiar with around here—law firms, like “Smith, Davis and Jones.” Countries are also singular, even if they look plural, like the Philippines, for example.

Therefore, the above example should say “Apple wasn’t immediately available for comment…”

Public Mistakes Like This Give Your Business a Black Eye

Situations like these separate the good writers from the pros. They’re also a perfect example of why it’s a great idea to hire a professional writer and editor to help you with your content creation. Unless you studied the intricacies of the English language, these things may be new to you—and that’s okay! It’s our job to hire the best and brightest writers and editors for our team, so you can do what you do best!

If you’re interested in learning more about grammar, punctuation, or how we can help you succeed on the web, give us a call at 888-886-0939.