The comma is generally held to be the most versatile of punctuation marks, with at least a dozen primary uses—and even more if we look at subtle distinctions (yeah, Mr. Oxford Comma, we’re talking about you).

As we travel across the printer’s case, we encounter punctuation marks with fewer and more restrictive functions. We shouldn’t be surprised that these marks tend to be used less often. They are robust enough for their special functions, but those functions are uncommon and so are their marks. Punctuation marks are tools for writing, and they will be employed according to the writer’s needs. To strain the tools metaphor: everyone owns a hammer, but how often are you going to need a shingle froe? 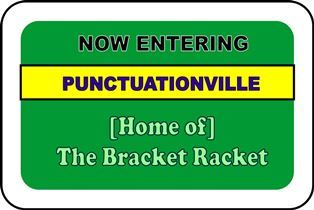 As far as punctuation goes, I used to have a certain fondness for the octothorp as one of the marks left in the shadows. Then, when the digital telephone became common in the 1980s, the octothorp surged in popularity and was rebranded the “pound sign.” A decade or so later, and it became known as the “hashtag.” Punctuation marks can rise and fall in common use, even within a relatively short time—although one could argue that the octothorp could only pick up additional functions because it was obscure and underused in the first place.

Nowadays, we still have a punctuation mark (well, technically, a matched pair) with only one function. Brackets—these things: [ ]—evolved from parentheses, but now they function in a much more limited way. Yet it is vital that every nonfiction writer, including people who write content for commercial websites, understand how to use brackets properly…and ethically.

The preferred term in the United States for these punctuation marks is brackets, but some people have been taught to call them square brackets, square parentheses, closed brackets, or crotchets. If you were taught one of these alternative names in grammar school, you may have to mentally adapt the following discussion.

As we mentioned, brackets have been reduced to a single function: they work within direct quotations as parentheses to provide supplementary information needed for the reader. This sort of information can take many forms, including:

It’s presumed that, if parentheses appear in directly quoted material, then the parentheses were in the original text; they do not “convert” to brackets when quotation marks are added.

The Ethics of Direct Quotations

The ethical writer must treat direct quotations with delicacy and respect. It’s just as wrong to revise someone else’s words as it is to appropriate their words for your own use. This is no less true for the content writer, who may be writing as a sideline to his or her main job.

If you are writing material for an attorney, medical, or business website, most of the direct quotations you will use will either be testimonials and endorsements from your previous clients and customers, or citations from reputable sources to substantiate a claim you are making. If it’s discovered that you have modified those quotations, your credibility is destroyed. All the endorsements you have displayed will be viewed with suspicion. Nobody will accept the claims you have made. Practical considerations as well as ethical rules say that you must not tamper with quoted material.

Now, if you are working from or transcribing an audio sample, you have great freedom to set punctuation and make sure the spelling is conventional in the quotation you write down. If you have an actual written text to work with, then your options are more limited. You can use brackets to insert explanatory words or note where you have made cosmetic changes to the text (such as the capitalization example a few paragraphs ago). You can use an ellipsis to remove irrelevant or repetitive parts of the quote.

Sometimes, though, all this repair work isn’t good enough. Perhaps the quotation you have to use is packed with misspelled words and grammatical errors. You don’t want to seem to endorse those mistakes, but you do want the advantage the quotation gives you.

The [sic] option isn’t perfect. It can seem to mock the author. Each time you use it within a composition, you distance yourself a little more from any support you might get from each quotation. If you have multiple quotations that are very flawed, it’s often a better choice to paraphrase the original words, rather than to try and quote them precisely.

Some readers will be wondering why we haven’t mentioned braces at this point. These symbols—{ }—are sometimes called curly brackets or squiggly brackets, and they’re yet another entry in the extended parentheses family. However, they’re not used in formal writing any more. Sometimes they appear as typographical symbols in musical notation, mathematics, or (I’m told, but have never observed) poetry.

Don’t worry about braces; they won’t be covered on the final exam. Standard parentheses and brackets: learn how to use these, and your needs will be covered.