Tales of Suspense and Perilous Punctuation: The Ellipsis

Punctuation marks are the highway warning signs of the sentence. By that, I mean: they regulate the traffic. They signal diversions, stops, pauses, and incoming material that is merging with the main thought. All in all, punctuation serves to slow 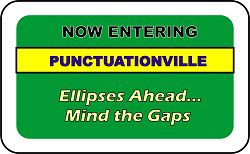 down the sentence’s headlong rush to get to that final period.

But each species of punctuation mark works a little differently. Sometimes dashes can substitute for parentheses, certainly, but the dash can also accomplish things that parentheses cannot. A semicolon and a comma share some of the same powers, but the comma is far more versatile. And so on.

Today, we’ll turn our attention to the ellipsis…that’s right, that little sequence of what you thought were three periods has its own name, its own identity, and its own unique functions. And you have to understand those functions if you hope to write well, whether you’re producing effective website content for your business or writing for another purpose.

Lost in Thought: When to Use the Ellipsis

The noun ellipsis (plural: ellipses) is related to the verb elide, which means “to omit, to strike out, to abridge.” An ellipsis, therefore, is a signal that something has been removed or is being glossed over. This is markedly different from how a dash or colon alerts the reader that peripheral information is coming. The ellipsis says to expect a gap in thought or in logical reasoning, and it cues the reader to be ready to puzzle out the significance of what is omitted.

Specific ways that you may wish to use the ellipsis in your writing include:

The writer shows enough to define a pattern, but doesn’t try to show all the elements of the set. Indeed, sometimes that may not be possible (there is no final prime number, for instance).

Omitting words within a quotation

“These are the times that try men’s souls,” wrote Thomas Paine in The Crisis. “Tyranny, like hell, is not easily conquered…What we obtain too cheap, we esteem too lightly: it is dearness only that gives every thing its value.”

If you only require a portion of a quotation to make your point, use an ellipsis that shows where you left out material. It should go without saying that there is an ethical obligation not to distort the original author’s intent when you leave out some of his or her words. The power to delete is the power to deceive. Consider the difference between these two sentences:

In quotations, the ellipsis at the end often signals that a voice is trailing off into silence.

Indicating an incomplete thought or a leading statement or question

Here, the omissions shift to the end of the sentence, and the reader has a moment of suspense to consider what might follow. The second example shows how a question mark may be combined with an ellipsis, but some writers would omit the question mark entirely.

Introducing a list of alternatives, instead of using a colon

The possible causes of an ingrown toenail include…

One of the strongest cases for using the ellipsis more often is its versatility in introducing bulleted lists, as we see in this example. You can use an ellipsis rather than a colon when the items in the list would form a complete sentence following the introductory phrase.

In the days before computerized typesetting, an ellipsis was generally formed by putting spaces (sometimes half spaces) between three periods. Today, modern word processors and electronic typography uses a specific ellipsis character, Unicode designation U+2026. Many word processing programs will automatically convert three sequential periods into an ellipsis character. One can also produce an ellipsis…

An ellipsis at the end of a sentence is not usually followed by any other punctuation. Very rare exceptions would put an exclamation point or question mark immediately after the ellipsis. Experts agree you never follow an ellipsis with a period.

Various writing authorities disagree about whether an ellipsis should be placed flush against the surrounding text or, instead, separated by spaces. The Chicago Manual of Style, which is highly regarded, recommends that a space precede an ellipsis and also follow it unless the ellipsis is the last character in the sentence. I can’t find it in myself to feel strongly on either side of this debate. I do not place spaces before and after an ellipsis, but I don’t get alarmed if other people choose to do so. Frankly, when we’re dealing with commercial websites, the difference in appearance isn’t significant enough to make this a major concern.

But the proper use of ellipses is content writing is worth thinking about. Now, some writers get too enamored of this punctuation mark and use it willy-nilly. That becomes distracting and inevitably discourages readers. However, there is a proper role for the delicate use of an ellipsis now and then, when you need a bit of momentary suspense, need to introduce a list, or need to abridge a lengthy quotation.

Do you have any questions about punctuation or any other grammar or usage concern? Use the feedback form on this page for a brief response—or we may discuss the issue at length in a later column.