I got hooked on following the vagaries of language while attending middle school. On one particular day, the lesson was about English usage and idioms. The teacher was making the point that it can be disastrous to use a word that’s almost the right one, or a word that only sounds like the term you intended to use.

Then he wrote a travesty of a nursery rhyme on the blackboard: 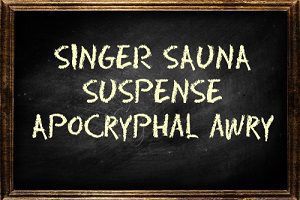 I was stunned. I was aghast that such errors could be made, and elated that the English language was quirky enough to allow blunders of this magnitude. It was a personal revelation about how words can go wrong.

Just a year ago, we reviewed how usage mistakes and idiom errors can break the spirit of your content writing, embarrass your writing staff, and hurt your business. In the months since then, my jaundiced eye has spotted even more slip-ups, blunders, and solecisms. Today, we’ll look at half-a-dozen crimes against the English language, illustrated by examples from real-world content writing. As usual, some of the examples have had minor details changed to avoid exposing writers and their employers to ridicule.

The Turkeys Come Home to Roost

“Once you have a better understanding of how your herniated disc injury is going to effect you, then you should contact a motorcycle accident lawyer if you have not already done so,” according to a piece of content writing that crossed by desk not too long ago. WRONG! The writer here needed to use the word “affect” instead, of course.

Most of us have been taught a straightforward rule for keeping these words under control: affect is the verb, and effect is the noun (and the adjective effective derives from the noun). That’s almost always right, but sometimes it’s exactly wrong:

According to one website writer, “Our videos are chalk full of information you need to make the most of every page and feature on your website.” WRONG! This idiom, meaning “filled to capacity,” ultimately derives from the phrase “choke full”—in the sense of filled to choking. Because vowel sounds have shifted over the centuries, this is now more often found as #chuck full. “Choke full” is still acceptable, if old-fashioned—but drop the “chalk.”

People learning English as a second language often find the trickiest feature of idiomatic phrases is their arbitrary combinations of words. One cannot figure out by logic alone whether a phrase might require than, of, out, or some other little word. Only experience and memorization can develop skill in handling idioms.

You want an example of how unpredictable this can be? Sure. Think of a two-word phrase that means “to stop doing something; to surrender; to yield or abandon.” If you have learned American English, the answer is to give up. If you have learned British English, the answer is give over. Now, there is nothing intrinsically evident about either “up” or “over” that would give the whole phrase its distinctive meaning. Nor is there any obvious reason why one continent would prefer a particular version of the phrase over the other. As I said: arbitrary.

So perhaps we can be understanding when a content writer wrote, “Not sure what to expect from working with the Clemons Law Group? Check out some of these past results for an idea of what we’ve done to help others facing similar situations as you.” Unfortunately, the conventional idiom is “similar to,” not “similar as.”

Perhaps the accepted phrasing “the same as” has led some writers to believe that “as” also goes with the word similar. Nevertheless, an analysis of English word usage shows that “similar to” is favored more than 3-to-1 over “similar as.”

Every Day vs. Everyday

The word everyday is not equivalent to the phrase every day. Everyday is an adjective that means “ordinary, common, normal, not special.” It’s correctly used in this sentence: “Wear your best clothes in the courtroom; it’s not appropriate to appear before the judge in everyday jeans and a sweatshirt.” Note how the word modifies—attaches to and changes—the noun jeans; that’s a sign of an adjective at work.

The adverbial phrase every day means “each day.” As an adverb, it will modify a verb or verb phrase (or, very rarely, an adjective or another adverb), but never a noun. Example: “The laboratory will return blood test results every day before noon.” If you can substitute “each day” for “every day” in your sentence, your usage is probably correct; if that swap doesn’t make any sense, you probably should be using “everyday.”

The word “literally” is an adverb meaning “really; without exaggeration.” Then, perhaps 20 years ago, people began adding the word to sentences to protest their sincerity of the depth of their feelings. This informal use gradually leaked out into popular understanding, so many people now think that “literally” means “metaphorically; figuratively; true in spirit if not in actual fact.”

That’s right: literally can now be defined as meaning “not literally.”

A word that means the same as its antonym is useless. If you add that word in a sentence, you aren’t refining the meaning of the sentence in any way. Look at how these content writers have gone astray:

Use “literally” when you want to project sincerity…and then tell the literal truth.

This error comes to us thanks to sloppy articulation. Examples:

The contrast between “might have” and “would of” in that first example points the way to how this became a common error. Over time, spoken “might have” gets shortened to “might’ve,” and that informal way of speaking ends up in written text as “might of.” The same process explains could of, should of, and would of. They’re all unacceptable in content writing.

It’s traditional at this time of year to express gratitude for the good things in one’s life. Well, who am I to argue with tradition? I’m grateful for the chance to write these essays, for instance. I’m grateful for my readers and the feedback they give me. And I’m certainly glad to have a sterling editor and proofreader who can catch most of my mistakes before publication.

And I’m certainly glad for the English language for giving me this enormous sandbox in which to play.

It’s open forum time, folks! What aspects of English have filled you with joy? Or—more in keeping with today’s theme—what common language errors are your own pet peeves? Leave feedback in the comment section on this page, and we’ll share your views with a wider audience.