November Is Our Bad Usage Month: What’s That in Your Pudding?

This article has its origins almost ten years ago.

My mother was recounting some complicated story about some of our other relatives. I was preoccupied by something else at the time and not paying close attention. In my defense, I did try my best to keep up by nodding and murmuring comforting words every now and then.

Then, suddenly, my focus shifted. Mom had said something … odd. “What did you say?” I asked. 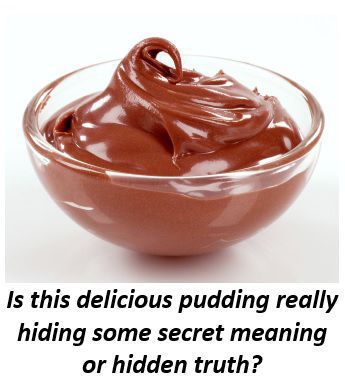 “I was telling you about your sister, and how the people she works for are giving her the runaround again…”

“No, the words. What were the exact words you used last?”

I looked at her blankly. “What pudding? What is that even supposed to mean? I’ve never heard such a thing.”

Mom gave me one of her looks (I get them often). “Well,” she said, “it means that the truth will come out eventually, I guess. I don’t really know what pudding has to do with it. It’s just something people say.”

I turned back to my work. “No. People most definitely do not say that.”

I Was So Wrong

My mother is one of the smartest people I know. If she tells you that some goofy, misquoted catchphrase is now “something people say,” you’d better believe it. It turns out that LOTS of people say “the proof is in the pudding,” even though they’re not quite sure what it means.

We’re going to use this month to look at peculiar, yet common, usage errors: malapropisms, lapsed syntax, mangled idioms, and all the other ways that people use words in the wrong way. And when I say “people” are making these mistakes, I mean that skilled and seasoned professional content writers have made these mistakes. In fact, even if you have a great professional website for your business, law practice, or medical clinic, it’s quite possible one of these mistakes is lurking somewhere on one of your web pages.

We are going to cover 20 examples, and we have only one month, so we’d better get moving. Don’t worry; I promise you will get to the pudding along the way.

Twenty Usage Errors You Don’t Want on Your Website: The First Bunch

A malapropism occurs when a writer or speaker reaches for a word at the edge of his functional vocabulary, and grabs a word with a similar sound but a different meaning. The term comes from the name of a character—Mrs. Malaprop—in an 18th century comic play.

The phrase “unchartered waters” provides an excellent example of a malapropism. The writer intended “uncharted waters,” in the sense of an ocean or sea that has not been mapped or explored; it’s a powerful metaphor. Unfortunately, “unchartered” is an adjective describing a business that has not been officially recognized by government; its synonyms include lawless and unauthorized.

Try not to giggle when someone uses a malapropism in spoken conversation.

Sorry to say, but there is no such word. The person who uses “irregardless” is conflating two different words that happen to have similar meanings: “regardless” and “irrespective.” Most of the time, the word he wants to use is “regardless.”

Some writers prefer “oftentimes” as a way to provide contrast with “sometimes.” I can’t say these writers are wrong, exactly, but they’re probably sending a subtle message they don’t intend.

Oftentimes and its much, much rarer cousin, oftentime, are old words with long histories in the English language. There’s even a third variation, ofttimes, that’s mostly limited to a few regional dialects in the British Isles. The two-word version, “often times,” isn’t standard English anymore, and should not be used. As for the others: they sound fussy, formal, quaint, and old-fashioned. They give a similar impression as your Great-Aunt Dottie, who always wears a hat and gloves and tells complete strangers that she’s thoroughly modern because, as she says, “I own one of those computer machines.”

You have no idea of the thickets you will have to slash through when you try to sort out the ways writers use “comprise” and “is comprised of.”

The verb comprise can mean “to contain, to be made up of, to consist of, to be built from,” and lots of other similar phrases. Virtually every time the word is correctly used, the sentence will take the form of “[the whole] comprises [the parts],” as shown in these examples:

The chief usage errors associated with “comprise” fall into the categories of incompleteness, reversal, and the false passive construction. We’ll look at each of these in turn.

The word comprise indicates that the list of parts making up the whole is a complete list of parts. “Comprise” is a more comprehensive verb than “includes.” You would never say, “My family tree comprises my grandfather,” for instance, because many other people are omitted. It’s an error when the direct object of the verb comprise doesn’t specify the full contents of the subject.

Some writers use the word comprise to mean “to make up,” exactly the reverse of the standard definition. Those writers produce sentences like, “Fifty-two cards comprise a standard deck of playing cards.” Sorry, no; this is incorrect usage. The better alternative here is the verb compose, which appears in sentences that take the form “[the parts] compose [the whole].” An example: “Twelve months compose a year.”

“Is comprised of,” the false passive construction.

The writers who use this phrasing give it the same meaning as “comprise” as an active verb: “to be built from.” Most dictionaries find this usage unacceptable.

This is a modern misstatement of an old proverb, “The proof of the pudding is in the eating,” where “proof” meant “test.” In other words, sampling will determine if the recipe is any good; metaphorically, the phrase means “the results will show whether our attempted solution was the right approach.” The original proverb has been traced back to the early 17th century, but the modern version appears to have originated in the early 1900s.

If you want to quote proverbial wisdom, please do use the original version. It’s now so uncommon that it will seem fresh, rather than clichéd.

Disinterested does not mean the same as uninterested, although I could show you a number of writers who believe otherwise.

“Disinterested” means impartial or lacking a stake in the outcome. That’s a positive quality in some circumstances (for instance, when you’re looking for an unbiased judge or mediator). “Uninterested,” in contrast, always has a negative connotation: it describes someone who is bored, unenthusiastic, or uninvolved. Do not mix up the two words.

Aggravate means to make something worse. It does not mean to irritate, annoy, bother, or provoke. “Eating cold anchovy pizza aggravated my gout” is a legitimate use of the word if the writer already was suffering from gout in the first place.

I recently edited a webpage in which the writer had written, “If you decide to try and avoid the hazard by slamming on your brakes, you could not only cause the car behind you to rear-end you, but you can also increase confusion and stress in your fellow motorists.” Using the try and combination is, at best, very informal; it’s acceptable in conversation, but not in written work for the general public. The preferred approach is to use “try to [do something]”; for instance, “Try to avoid severing that artery, Dr. Asafoetida!”

There is one noteworthy exception to this rule: it’s okay to use “try and” + another verb when the action of the second verb happens unambiguously. As an example: “Harold tried and failed to move his auto from the tracks before the locomotive came through.”

In future weeks, we’ll take a look at some other usage errors and solecisms, including the key question of whether or not it’s okay to say “whether or not,” and why it’s a bad idea to boast of the “quality” content on your website. Until then, you can always get advice on usage and grammar from our web content mavens by clicking on the instant chat icon on this page.