September is back-to-school month for much of the country, and that got me thinking. I yield to nobody in my admiration for teachers. They should be celebrated as heroes.

I could never be a teacher. Oh, I enjoy the process of mentoring people and seeing the light of comprehension dawn on someone’s face. But I do not have the required patience to re-explain, and then re-explain again, until a student finally understands. I get positively peevish when someone who has 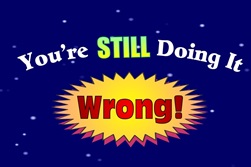 supposedly mastered the material goes on to make the same mistakes over and over again.

Willful ignorance infuriates me. To paraphrase Woody Allen: there are some people you just want to pinch.

Now, reasonable people can disagree about the fine points of grammar. I’m happy to let smart people chose the grammar rules they wish to use. But the other side of that coin is that there are some fundamental rules that aren’t up for debate. The possessive its does not contain an apostrophe. Your and you’re cannot be swapped for each other. A comma, by itself, cannot join two independent clauses into one sentence. Questions must end in a question mark.

When I see glaring errors prominently displayed in professional website content, I wince. But a handful of mistakes have become more common, not less, over the years I’ve been writing this column.

There’s No Hall of Shame When Writers Are Shameless

We’re going to take a look today at six particularly annoying error types I see over and over again. I’ll illustrate the mistakes with excerpts from actual content writing—with slight modifications to the text so I don’t embarrass anyone. Review these errors. Think about whether you commit them regularly. Resolve to do better.

This will not do. Muddling singular and plural forms can only confuse the reader. But it’s done a lot in content writing. And the mistakes can affect multiple parts of speech, as we see in these examples:

2. Remember That Organizations Are Not People

Businesses, charities, governments, and other organizations that consist of people are not people themselves. Grammatically, they are treated as things. They are referred to as “it” rather than “he.” A single organization is treated as a singular noun.

3. Beware of the Ampersand

The ampersand—also called the “and sign”—is an ugly little squiggle (&) that should be avoided in content writing. Yes, you must use the ampersand if it’s part of a title, trademark, or business name, such as Scrooge & Marley. But don’t substitute an ampersand for the word “and” on your own. I’d caution that it’s especially important not to use an ampersand to cram in more characters into titles, headlines, and other meta-content.

Because the ampersand isn’t a common symbol, it interrupts the flow of reading in a way the written word “and” does not. It stops a reader for a moment in the middle of your sentence, and that’s never a good thing. It also proclaims that the writer is lazy, preferring to save a couple keystrokes no matter how it may inconvenience the reader. Look at this example:

Ampersands should be avoided in business writing. It’s just that simple.

4. Don’t Use a Hyphen When You Need a Dash

The hyphen and the two forms of the dash are different symbols and perform different functions. When you want to include information that’s not essential to a sentence, use a pair of dashes, not hyphens.

The hyphen is used properly to weld together the compound adjective first-time. But the breaks in the sentence require dashes instead.

5. Random Capital Letters Will Lead You to Ruin

Using capital letters for emphasis is acceptable if done sparingly. And I admit a certain fondness of the modern habit of using capitalized words to signal irony (“No,” Ginevra said, “Please don’t take Anthro 101 with Professor Herkimer. He will expose you to Secrets Man Was Not Meant to Know.”) But I would think twice before using ironic capitals in business writing.

But the target of our wrath here should be those instances where writers simply stick in capital letters for no good reason. Consider these examples:

The combination “and/or” is widely disliked for everyday writing, and some critics even object to “and/or” in legal writing. The phrase is stuffy and legalistic. Almost always, it can be replaced by a simple “or” or, less often, “or...but not both.” Instead of giving your writing clarity, “and/or” creates ambiguity. Just avoid it.

One might equally ask someone who produces content for a professional website, “What do you write?” The best answer, of course, would be something along the lines of “engaging and informative text that my reading audience can use.” Sorry to say, there’s no ready recipe for writing that meets those specifications.

It’s worth bearing in mind, however, that the general public is not known for strong reading skills. To communicate effectively, you will need to eliminate barriers to clear communication—such barriers as the six common errors we discussed today.