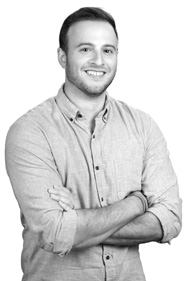 After graduating from Arizona State University, Ben moved back home to the DMV where he worked two digital marketing jobs before taking a position at a major media company, working as a Digital Producer for many of his wife’s favorite TV Networks and shows (hint: Chip & Joanna Gaines). While there, he expanded his digital knowledge into analytics, SEO, engagement and email marketing. After several years, Ben took on a new role at a start-up consulting firm, working as a Senior Digital Producer and SEO + Social Media Account Manager before joining the team here at Foster.

After getting married in September of 2018, Ben and his wife packed up and moved to Amsterdam just 10 days later. He spent the better half of the next two years living and working in Amsterdam and traveling throughout Europe. During his time abroad, he visited 15 countries and over 40 different cities. Needless to say, one of the things Ben enjoys most in life, is traveling.

Aside from traveling, Ben enjoys spending time with his family and friends, biking, live shows (pretty much anything music-related), playing/watching sports, and a nice IPA or glass of scotch.

Ben is a HUGE fan of Kentucky Men's Basketball and the Dallas Cowboys (even though he grew up in the DC area). His Kentucky affinity kind of makes sense (feel free to ask him why), but his Cowboys fanhood is just a product of his formative years being lived in the early 90s.